One of our project goals is to understand the food web associated with Sargassum. Check out the blog post below from Zabe Premo (PhD student, USM) detailing how stable isotopes can help us understand feeding ecology in marine ecosystems.

Stable isotopes have countless applications in physical and biological sciences, as well as medical research, forensics, and Earth and environmental systems. Simply speaking, atoms are comprised of protons, neutrons, and electrons. Combined, protons and neutrons form the nucleus of an atom, while electrons orbit the nucleus.  Each element has a set number of protons contained in the nucleus, for example, carbon has six protons and nitrogen has seven protons, while the simplest element, hydrogen, has one. Generally, most elements have the same number of neutrons and protons, but sometimes, additional neutrons are present, thus increasing the mass of the atom but not changing the element itself. Atoms with the same number of protons but differing numbers of neutrons are isotopes of one another, and may be radioisotopes, where the isotope radioactively decays into a new element by eliminating a radiogenic particle, or stable isotopes, where the structure of the nucleus of the isotope does not change over time.

Stable isotopes are useful in ecological systems because they can be employed as tracers to evaluate a range of interactions. In the Sargassum study, stable isotopes of carbon and nitrogen are used to assess where organisms associated with the Sargassum features are getting their food (carbon), and who is eating whom within the foodweb (nitrogen). Samples that are collected encompass microorganisms, algae (including both S. natans and S. fluitans), invertebrates, and fish at a range of life stages. Back in the laboratory, samples are analyzed with a mass spectrophotometer to determine the relative ratio of “heavy” isotopes to “light” isotopes. In the case of carbon, the common (and also “light”) isotope is 12C, meaning it has six protons and six neutrons, while the “heavy” isotope is 13C, meaning it has six protons and seven neutrons. Biological processes such as respiration that use carbon-based molecules can fractionate the isotopes, wherein the “light” and “heavy” isotopes are separated due to differing energy potentials in their atomic structure. The result is that the tissues of organisms will have a particular isotopic ratio that can be used to evaluate environmental conditions, food sources, and regional variation, among many other parameters.

Similarly, because organisms eat one another, nitrogen isotope fractionation is evident with increasing trophic level, with “heavy” nitrogen (15N; seven protons and eight neutrons) abundance increasing as predators consume lower trophic level organisms and nitrogen forms portions of muscle tissue and amino acids. A portion of the Sargassum study will look further into the behavior of nitrogen isotopes in this system through compound-specific isotope analysis (CSIA). As nitrogen flows through a food web, it is used to form amino acids, and by analyzing nitrogen isotopes of these amino acids, a better understanding of biosynthetic pathways is achieved, and it is possible to refine the relationships between trophic levels. This study considers not only muscle tissue of fish, but other tissues including blood, plasma, and liver which have different turnover times in the body, and can demonstrate shorter-term feeding habits (versus muscle which has a lengthier turnover time). 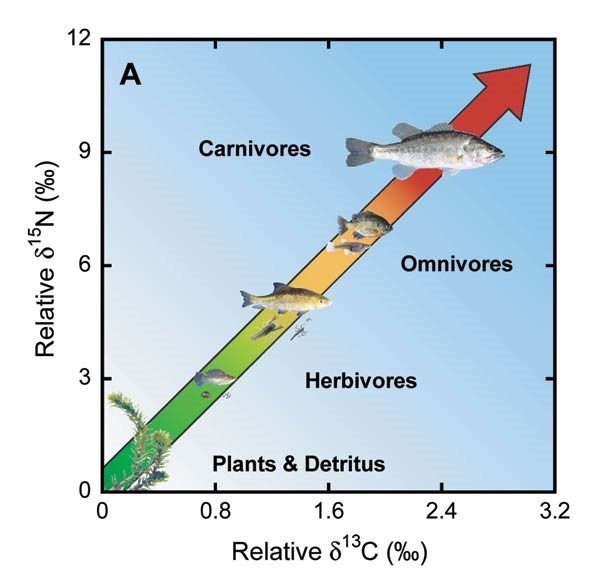 From: https://oceanbites.org/
The basic plot shows that with increasing trophic level in a food web, both of the “heavy” isotopes of carbon and nitrogen increase. By looking at the isotopes of different tissues of the same organism, the goal is to see if we can pinpoint on which trophic level predators are consuming. The goal is to better understand the food web dynamics within this system, and to evaluate recruitment of fish to Sargassum features.